Glow in the dark road unveiled in the Netherlands 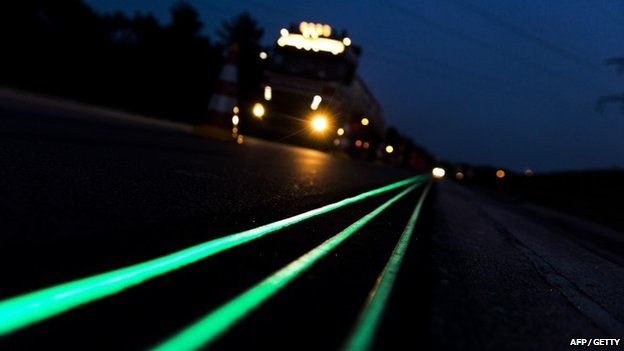 Glow in the dark road markings have been unveiled on a 500m stretch of highway in the Netherlands.
The paint contains a "photo-luminising" powder that charges up in the daytime and slowly releases a green glow at night, doing away with the need for streetlights.
Interactive artist Daan Roosegaarde teamed up with Dutch civil engineering firm Heijmans to work on the idea.
The technology is being tested with an official launch due later this month.
It is the first time "glowing lines" technology has been piloted on the road and can be seen on the N329 in Oss, approximately 100km south east of Amsterdam.
Once the paint has absorbed daylight it can glow for up to eight hours in the dark.
Encourage innovation
Speaking to the BBC last year about his plans Mr Roosegaarde said: "The government is shutting down streetlights at night to save money, energy is becoming much more important than we could have imagined 50 years ago. This road is about safety and envisaging a more self-sustainable and more interactive world." 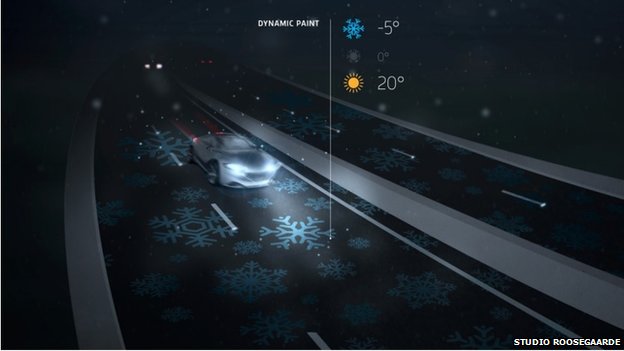 The team also hopes to develop giant weather symbols that appear on the road
Mr Roosegaarde's projects aim to help people and technology to interact. His past projects have included a dance floor with built-in disco lights powered by dancers' foot movements, and a dress that becomes see-through when the wearer is aroused.
"I was completely amazed that we somehow spend billions on the design and R&D of cars but somehow the roads - which actually determine the way our landscape looks - are completely immune to that process," Mr Roosegaarde said.
Heijmans was already working on projects involving energy-neutral streetlights when Mr Roosegaarde teamed up with the company.
"I thought that was updating an old idea, and I forced them to look at movies of jellyfish. How does a jellyfish give light? It has no solar panel, it has no energy bill.
"And then we went back to the drawing board and came up with these paints which charge up in the daytime and give light at night," he said.
Heijmans says that the glow in the dark technology is also "a sustainable alternative to places where no conventional lighting is present".
Pilot project
Innovation on roads needs to be encouraged said Professor Pete Thomas, from Loughborough University's Transport Safety Research Centre but new technologies need to prove themselves.
"We have some high visibility markings already on roads in the UK, plus cats-eye technology etc. So the question is how much better than these is this alternative? 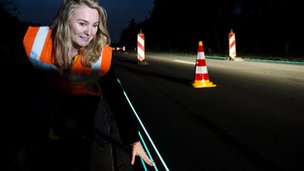 The Dutch Minister for Infrastructure Melanie Schultz Haegen visited the project
"If we put this technology on all unlit roads that would be a lot of kilometres and it would be a big investment so if safety improvement is the target then we need hard evidence about how this compares to what we already have and to back up any safety claims," he said.
The UK Highways Agency said it was watching the trial in the Netherlands with interest but said that previous studies had shown that "luminescent road paint would be unsuitable for use in this country".
It said it would take several things in to account when deciding whether to include luminescent road markings in its design standards. These would be include how far in advance road markings could be seen, how skid resistant they were, how visible they were during the day and how they would perform in winter when there are fewer hours of daylight.
Initially the team also had plans to develop weather symbols that appeared on the road once the temperature reached a certain level. A temperature-sensitive paint mixture would be used to create giant snow flake-shaped symbols on the tarmac to warn users that the road may be icy.
The current stretch of glow in the dark road in Oss does not include this temperature sensitive technology.
It is a pilot project at this stage and is expected to expand internationally later this year. Dutch media report that Heijmans is keen to use the paint on other roads but has not yet negotiated any contracts.

This is what it looks like to dive between two continents.

The best form of renewable energy

Dress that turns transparent when you're turned on... Science bitch!

This funky little demon is the Australian pea**** spider

Why aren't we investing in this?

Never see any recognition for this man

Tron, anyone? More info in source!

Hmm, i wonder how many cesium atom wasted every time you listening to your nagging wife...

Michael Lawrence: human is not yet ready to hold tht power. call it a blessing in disguise, for he might have build a more devious destructive tool.

Ant metamorphosis phases are quite interesting to see.

Can't imagine the king of all predators be so tiny.

This is how the Los Angeles night sky would look without light pollution.

I swear the guy's a freakin' prophet! (Link in source)

So the doctor will transfer my wife's diamond ring to my teeth...hmm...

Ironically, the rich fear bacterias so much...

Especially when your wife caught you cheating.

As a person who has a degree in animal science the misconception that dogs only see in b&w annoys me. Tried to keep it lighthearted though

Not mine, but wow!

You can even see the Fibonacci sequence in something as simple as a wet tennis ball.

Sometimes, you need to do a sacrifice to make an advance in science - and nobel marks the worth.

Brocken spectre: when the shadow of a Mountain is cast on the surface of clouds opposite the sun.

Who else thinks this is cool?

This does crazy things to my brain.

Penn and Teller keep it real

I try to not get too political and what not, but this is interesting

Needed to be said.

Going straight for the T-1000 series.

Pebble shore lake glacier national park. This is where Spongebob and Patrick got the 37,000 pounds of decorative undersea rocks.

Also, the entire original series is on Netflix. Go watch it, it's fantastic!

How to: Time travel (the alternate way)

Science in a nutshell

This here is the contra luz opal. It kind of looks like it has a whole nebula inside.

A lesson in perspective

View from under the wave

And you thought a mere insomnia was bad enough...

The easiest way to be an intellectual person is: learn from your mistake.

This is a "Salpa maggiore" a see through fish

A Maldives Beach Awash in Bioluminescent Phytoplankton Looks Like an Ocean of Stars.

The Void Does Exist. Or Does It?

Maybe Assassins Creed was onto something.