Here's a flavour of the tributes across the media on the 20th anniversary of Ayrton Senna's death.
Senna had everything it would take to create the grand prix hero of Hollywood's dreams. But something else, something more mysterious, captivated not just the fans who continue to revere his memory but later generations of drivers to whom he represents a permanent reference point.
Full story: Guardian 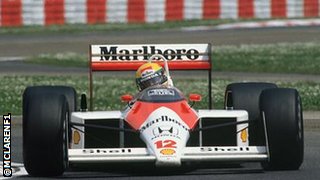 McLaren on Twitter: On this day in 1988 Ayrton Senna won for McLaren at Imola
Senna was an all thrills, many spills and naturally talented racer. But what about those who don't remember Senna, those that were either too young or perhaps not even born that now consider themselves part of the racing community? There are only so many YouTube videos and films you can watch, but it's never the same as seeing Senna live.
Full story: Independent
It was raining in Imola on Monday. Formula 1 stopped coming here eight years ago and moved on to lavish new circuits in Singapore and Abu Dhabi. There is blood on this track and time cannot wipe it away.
Full story: Daily Mirror
Ron Dennis, one of the people to have worked most closely with the triple world champion, found some of Senna's weaknesses to be the source of amusement, reminiscing that a driver who strapped himself so tightly into the car before winning in Brazil for the first time struggled with any pain outside of the cockpit.
Full story: Crash
Twenty years later, there is still no threat to Senna's status. Schumacher, Fangio, Prost and Sebastian Vettel have garnered more titles, but Senna is heralded as the greatest by every contemporary and every young pretender who has come since. They marvel at the dexterity of one who could propel himself from fifth to first inside 40 seconds in the wet, at the audacity of one who shunted Prost into the Suzuka dirt without so much as a trace of contrition.
Full story: Daily Telegraph 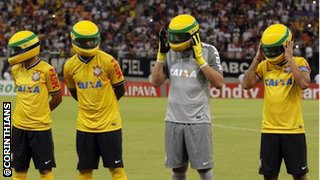 Ayrton Senna was a big fan of Brazilian football club Corinthians, who paid tribute to him by wearing his iconic helmet before their last match
Players of Brazilian football club Corinthians paid a touching tribute to Senna by each donning a crash helmet as they lined up before their match against Paulista. The helmets were the same bright yellow and green worn by Senna.
Full story: Independent
The deaths of Aytron Senna and Roland Ratzenberger at the San Marino GP 20 years ago sparked a drive for F1 safety that continues to this day.
Full story: FIA.com
McLaren on Twitter:  On this day in 1988 Ayrton Senna won for McLaren at Imola. On this day in 2014, we remember Senna.
Mercedes AMG F1 on Twitter:  Two decades ago today the racing community - and the world - lost one of its brightest talents: the great Ayrton Senna. Remember Ayrton now as he shone brightest in life: dancing on the limit.
Lotus F1 Team on Twitter:  We'll never forget the gift that you had and the gift that you gave to us.
Ayrton Senna would have ended his Formula 1 career at Ferrari had he not died at Imola 20 years ago, president Luca di Montezemolo says.

Watched the race live when I was 7. Still remember it like it was last weekend. RIP Senna, you da mayne.