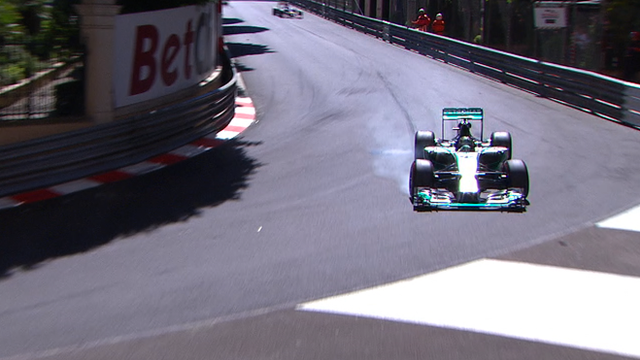 By Andrew Benson Chief F1 writer in Monaco
Mercedes driver Nico Rosberg has been cleared of wrongdoing over a controversial incident that sealed pole position at the Monaco Grand Prix.
The German, fastest at the time, locked a wheel and went into the escape road at Mirabeau on his final lap.
The incident brought out caution flags, preventing his team-mate Lewis Hamilton from completing his own final lap and securing Rosberg's pole position.
Race stewards said they could find "no evidence of any offence".
Rosberg told BBC Sport before going to the stewards that he was "surprised" to be called to give evidence, adding: "They'll see in the data it is all very similar to the lap before and I just locked up the front tyre."
Asked if he was uncomfortable about the incident, Rosberg: "Of course I need to apologise for having ruined his lap. But that's the way it is."
Play media 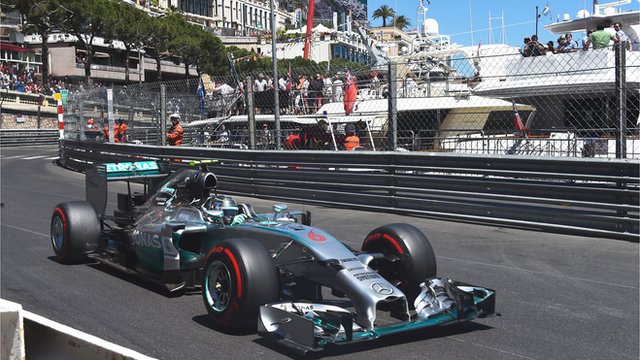 Rosberg claims pole at Monaco
The incident revived memories of an incident at Monaco in 2006, when Michael Schumacher deliberately parked his Ferrari at Rascasse to prevent Renault's Fernando Alonso, his title rival, from taking pole.
Hamilton is three points ahead of Rosberg in the championship heading into this race.
Hamilton said: "I found the time at the end and wasn't able to execute it so it wasn't a true showing of my true pace. But I should have known that was going to happen and done it the lap before."
Rosberg had been the quicker of the two drivers by 0.059 seconds on their first runs in final qualifying, and the incident came immediately after he was just over 0.1secs down on that lap at the first official timing point on his final run.
Hamilton was the next car on track, and had to slow down for yellow caution flags at Mirabeau.
The Englishman had been fractionally up on his previous time up that point, but the flags prevented any prospect of him beating Rosberg's time.
The incident has come during a weekend in which tensions between the two Mercedes drivers have been rising as a result of their close battle.
There have already been comparisons between this year and 1988-89, when McLaren team-mates Ayrton Senna and Alain Prost fell out while disputing two world titles.
Those battles ended in title-deciding collisions at the 1989 and 1990 Japanese Grands Prix, in the second of which Senna rammed Prost off the track at 160mph.
Play media 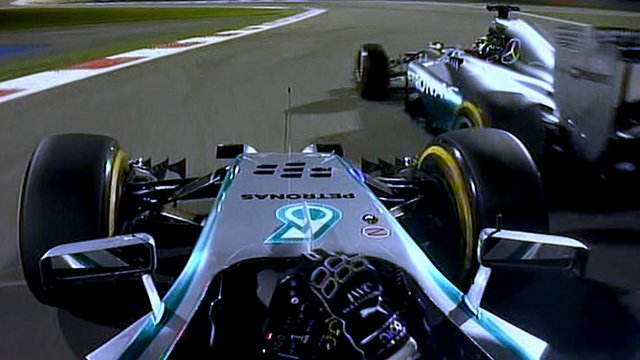 Mercedes duo's desert duel
Asked whether his relationship with Rosberg was "even more like Senna and Prost now", Hamilton said after qualifying: "Essentially."
When it was suggested the two drivers would have to sit down and discuss the incident, Hamilton said: "I don't know if Senna and Prost sat down and talked it out. I quite like the way Senna dealt with it, so I'm going to take a page out of his book."
Mercedes bosses defended Rosberg, saying the incident was an innocent mistake.
Non-executive chairman Niki Lauda, a three-time F1 world champion, said: "If you look at it the way I look at it, he tried to go quicker, braked too late, the right front wheel locked, tried to go into the corner and not to crash he had to go left.
"These things can happen. They happen to a lot of other people but there's nothing wrong about it."
Lauda admitted the atmosphere between the two drivers was tense.
"I fully agree. I think there might be some more discussions later today or tomorrow morning, I agree this thing is building up over there, but from my point of view nothing wrong on Nico's side. Lewis was now four or five times quicker than Nico and now Nico's quicker, so what is wrong about that."
Ferrari driver Kimi Raikkonen said of Rosberg's incident: "I saw he locked the wheel and ran wide but obviously I am not here to judge anybody and say what was true and what was not. He knows himself. Obviously it is hard to say was it a mistake or not. Everybody will have their own opinion about this."
Monaco qualifying result
Monaco Grand Prix full coverage details
Play media 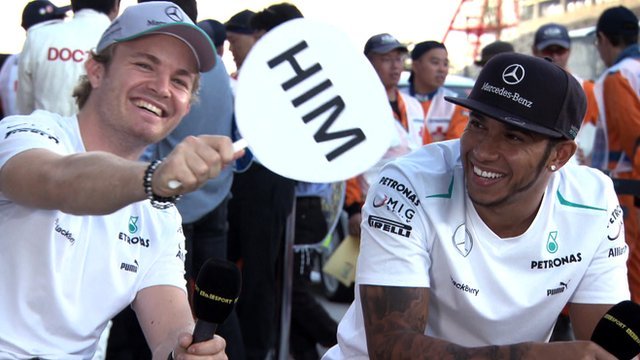 
Related to this story

Featured in this story

How to get into sports and activities near you, plus more about our campaign
More from Formula 1